Monday (4/16) was a travel day. We spent the morning getting ready and then were picked up by Bruno and Françoise who drove us to the airport. We sat around some more, then got on the plane. Unfortunately, they counted 184 people on board when their lists said there should only be 183 people. So, they counted us a bazillion times...then looked at all our boarding passes...then came on with their lists and checked off each of us on their lists...then counted us again... After 1 1/4 hours of this, they finally decided we could leave (but they never told us what had happened)! Of course we were late to London, but luckily no one was picking us up! We caught a bus into downtown London, then took another bus to Tower Bridge. From there it was a quick walk (under 5 minutes) to Caryn and Jan's beautiful flat. After dropping our bags, we took a nice walk with Caryn down to a pub next to Shakespeare's Globe Theatre. Jessie and I enjoyed some delicious macaroni and cheese--and we were generously treated to dinner by Caryn! It was so good to see Caryn again and fun to catch up! On the way home we crossed the Millennium Bridge (pedestrian only) and walked back on the other side of the river. We got to see St. Paul's Cathedral and the Tower of London--all lit up at night! Shortly after we returned to the flat, Jan got home and we all had tea and chatted until late.

On Tuesday (4/17), Jessie and I woke up early so we could take the tube across town and attempt to buy discounted tickets to the new musical, Matilda. The official website said that there were 8 tickets for people 18-26 that would be sold for only 5 pounds at 10am at the theatre. So, we wanted to get there early so we would be in the first 8 to arrive. When we woke up, the rain was beating down and we could hear the wind whipping around outside. Ugh. But, we headed out into it and made it across town. However, we got really confused and lost on our way to the theatre and ended up walking in all the wrong directions. At 9:50am we finally arrived outside the theatre with wet shoes and socks and damp hair--and discovered (not surprisingly) a line of 9 people. No luck.

Matilda (which had just won a bunch of awards) was sold out, so we couldn't get tickets to see it. We ended up going to a discount ticket booth at Leicester Square and buying tickets to see "Sweeney Todd" that evening. From there, Jessie and I walked to Covent Garden where we sat down inside a WARM and DRY café and had scones with clotted cream and jam. Mmm! After taking a little rest, Jessie and I went back out and discovered that it had stopped raining! There was a little bit of sun peeking out and now that our feet were dry(er) the world was looking a lot better! We hopped on some free bikes (using Caryn and Jan's bike cards) and rode to the British Museum. I almost managed to get hit by a double decker bus, but luckily that was avoided at the last second. Driving on the left side is just weird.

Our visit to the British Museum (both of our first times) was great! Neither of us are really "museum-y," so it worked out great! We wandered around and looked at whatever we thought was interesting--not taking too much time to read about anything that didn't interest us. Something I thought was really interesting was the chair made from weapons. 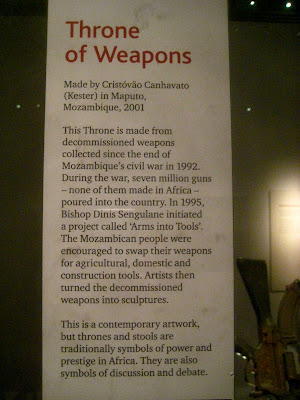 It had poured while we were in the museum, but had stopped by the time we headed back out. We decided to take the tube down to Westminster Abbey and the Parliament buildings--and were very pleased to walk out into bright sunshine! After wandering around and getting some pictures with Big Ben and the Abbey, Jessie and I found some more free bikes and headed up the path along the river. I don't think you're technically allowed to bike on that path, but the streets were rather frightening and we were really enjoying the view of the river! We went really slowly and were careful to mind the pedestrians...and even rode past a bunch of police officers, who didn't bat an eyelash when they saw us.


On our way back to Caryn and Jan's flat, Jessie and I stopped for a late lunch. It was 3:45pm and we were starving!! So, we found a pub that had a veggie burger and chips with a drink for only 3£95 and enjoyed a delicious lunch. Then we returned to the flat to rest for a bit (and skype with Maria!!) before going to see Sweeney Todd!

It was a great show! Sweeney Todd was being played by Michael Ball (the actor that originated the part of Marius in Les Miserables... the guy that has a trademark smirk and was the object of much mockery amongst my friends when I was young) and Mrs. Lovitt was played by Imelda Staunton (the great--albeit short--actress who played Professor Umbridge in the Harry Potter movies...and a load of other great roles). The show was set in the 1950s instead of the 1840s, but it was still really dark and creepy and very well done! After the show, Jessie and I went to the stage door to see if we could get pictures with some of the actors. Michael Ball (who now has facial hair and is a much better actor!) took one with us, as did the kid who played Antony, but Imelda Staunton said she doesn't do pictures. And, yes, she is tiny.